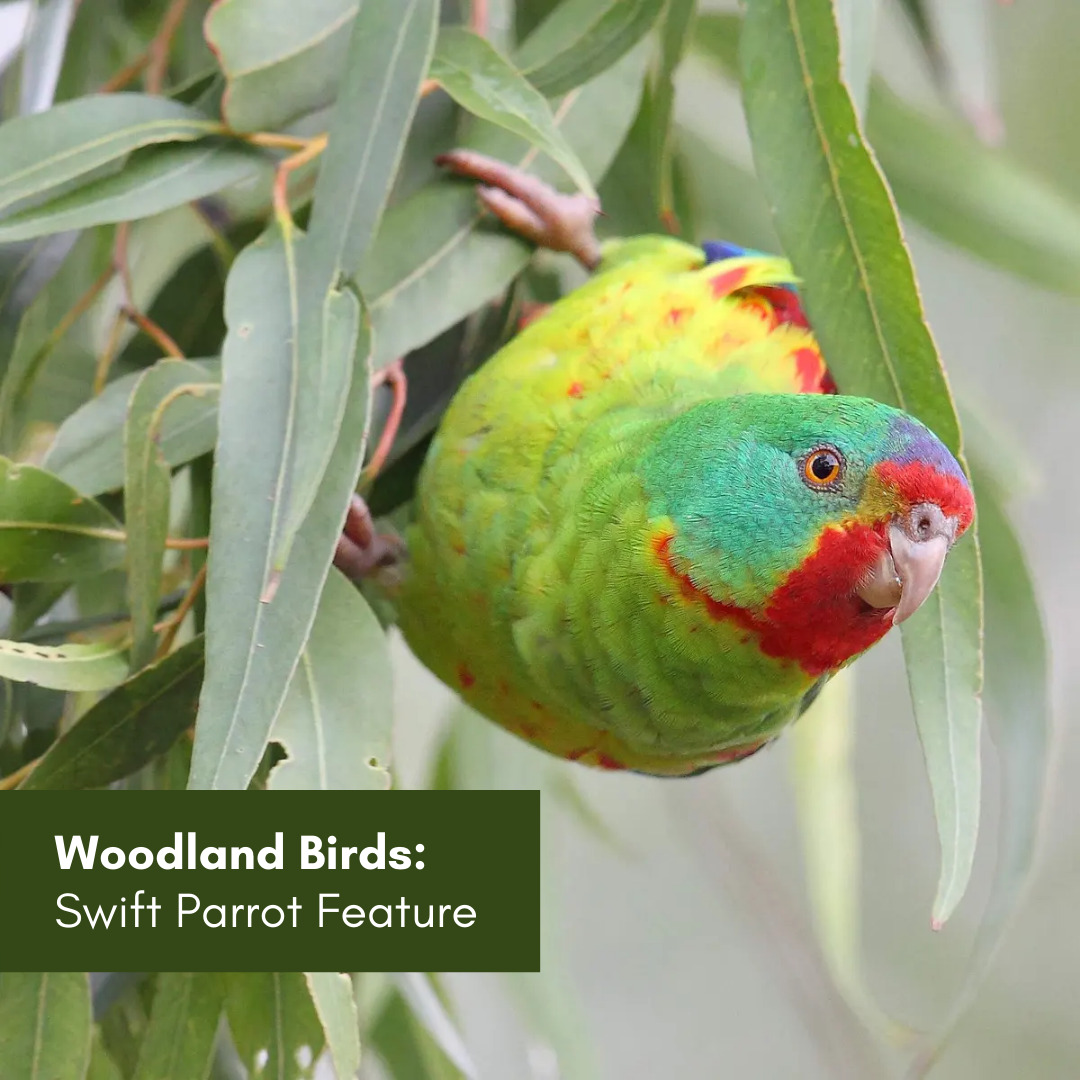 The Central Hunter Valley Woodlands and Eucalypt forests is a vegetation community that has been declared critically endangered since May 2015 (EPBC Act 1999). It is typified by limited undergrowth and a variety of eucalyptus species, including Box gums and Ironbarks.

The primary cause for the EPBC status is deforestation and land clearing for industry, population centres and agriculture. The decrease and fragmentation of this type of habitat has had a significant impact on our woodland species, including birds.

HRLN is focusing on two particularly woodland-based bird species as flagship species for conservation of the central Hunter Valley woodlands: the Regent Honeyeater and the Swift Parrot.

These flagship species are the basis of our free schools’ program including interactive learning, field visits, bird surveys, habitat hollows, and more. Please contact hunterregionlandcare@gmail.com for more information and a school visit. 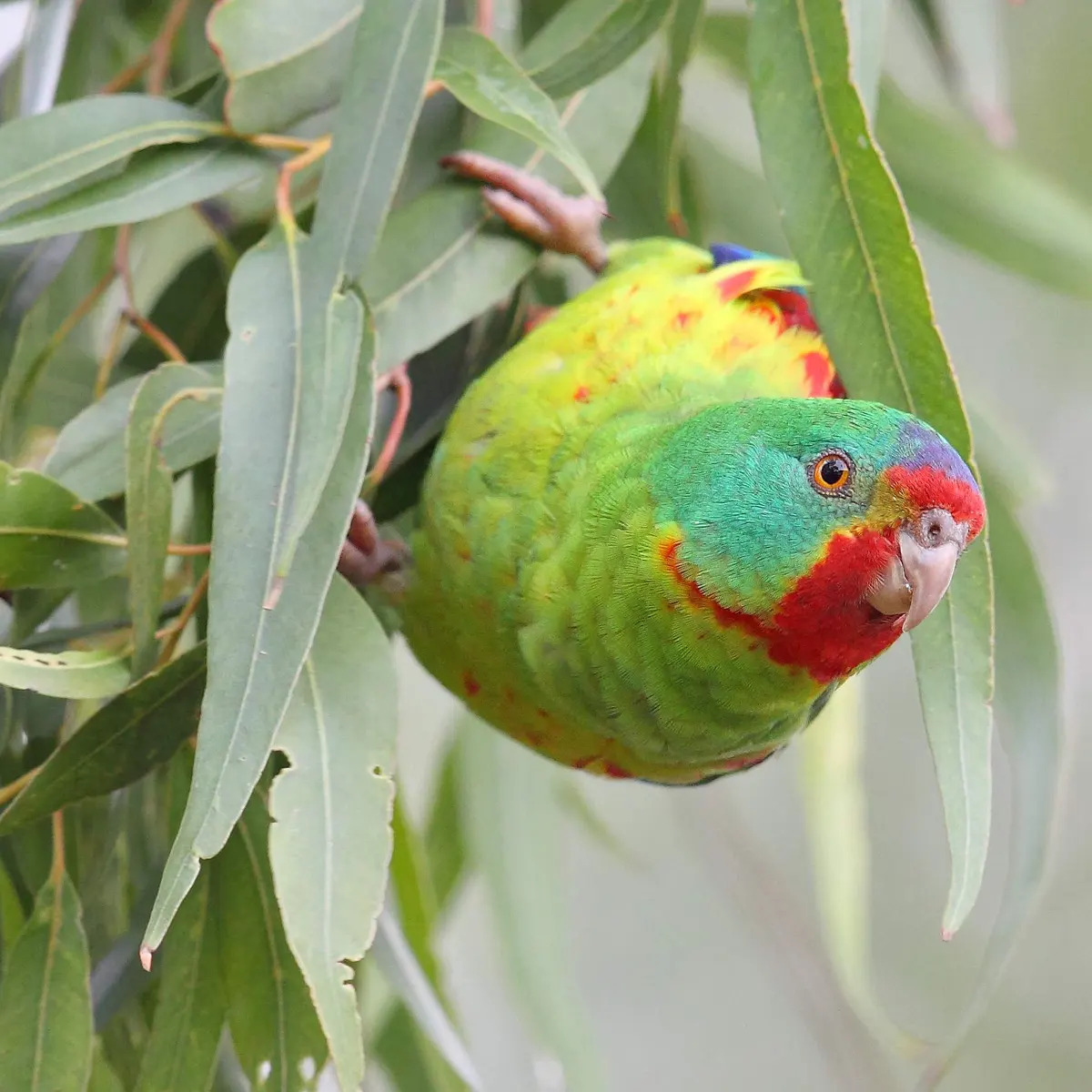 A small to medium sized parrot approximately 25cm long (bigger than a budgerigar, smaller than a rainbow lorikeet), slim bodied and mostly covered in bright green feathers. The wings are a brilliant display of crimson at the bend with turquoise and royal blue feathers; echoed by the crimson around the bill, leading to yellow at the throat, turquoise cheeks and a blue crown.

Swift Parrots are migratory. They breed in Tasmanian woodlands then ‘winter’ in Victoria, New South Wales, even Queensland between March and October. Their distribution changes annually and is dependent on conditions and population fluctuations. In abundant years when population levels are low, they may not migrate past Victoria. In New South Wales they most often occur in coastal woodland areas south of Sydney. In winter 2020, there were few birds sighted in the Hunter Region and only very small flocks. A flock as large as 60 as far north as Port Macquarie is reason to celebrate!

Swift Parrots feed on eucalypts and sap-sucking bugs, commonly known as lerp. In Tasmania, swifts feed on Tasmanian blue gum (Eucalyptus globulus) on the mainland favoured feed trees include winter flowering species including swamp mahogany (E. robusta), spotted gum (Corymbia maculate), Mugga Ironbark (E. sideroxylon) and white box (E. albens). Many of the box species (yellow – E. melliodora; grey – E. macrocarpa; and blackbutt – E. pilularis) are commonly infested with lerp and all of which are found in the Hunter region albeit not in large enough numbers. 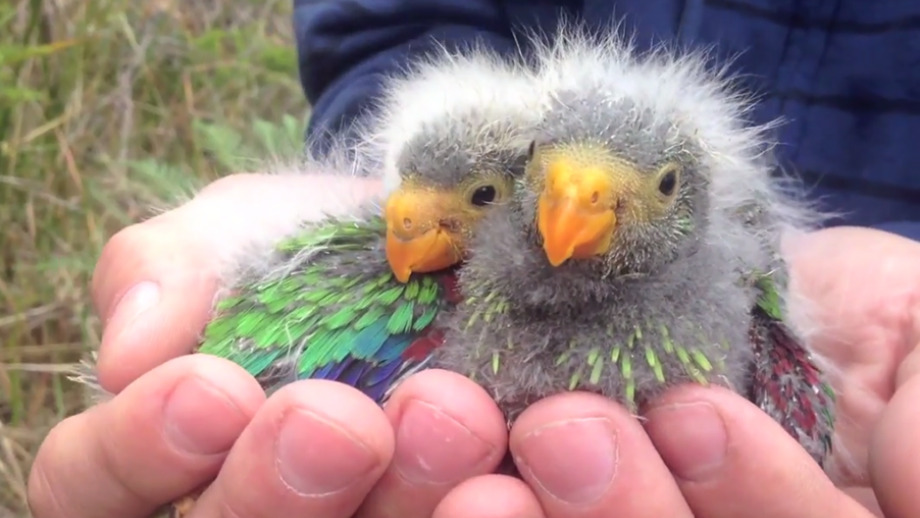 Swift Parrots congregate to breed in Tasmanian blue gum forests. They will build a nest in a tree hollow where pairs may return each year.

Swift Parrots are suffering the same tribulations as so many other species through loss and fragmentation of habitat. They are also under pressure from introduced species such as cats and are experiencing competition from aggressive natives such as noisy miners.

The Swift Parrot is an indicator species. If swifts are present, then that is an indication that the habitat is in reasonable,  good or recovering health. 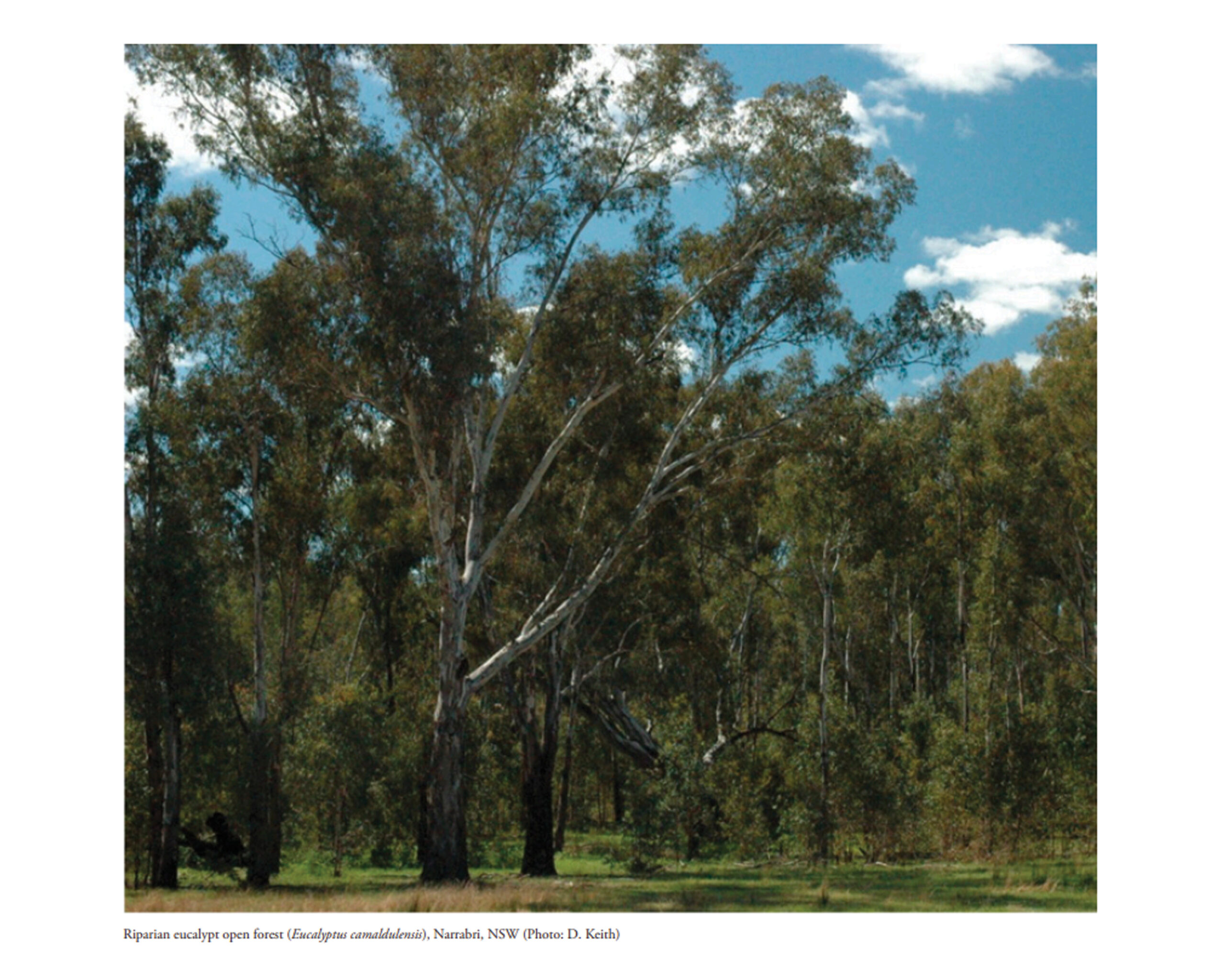 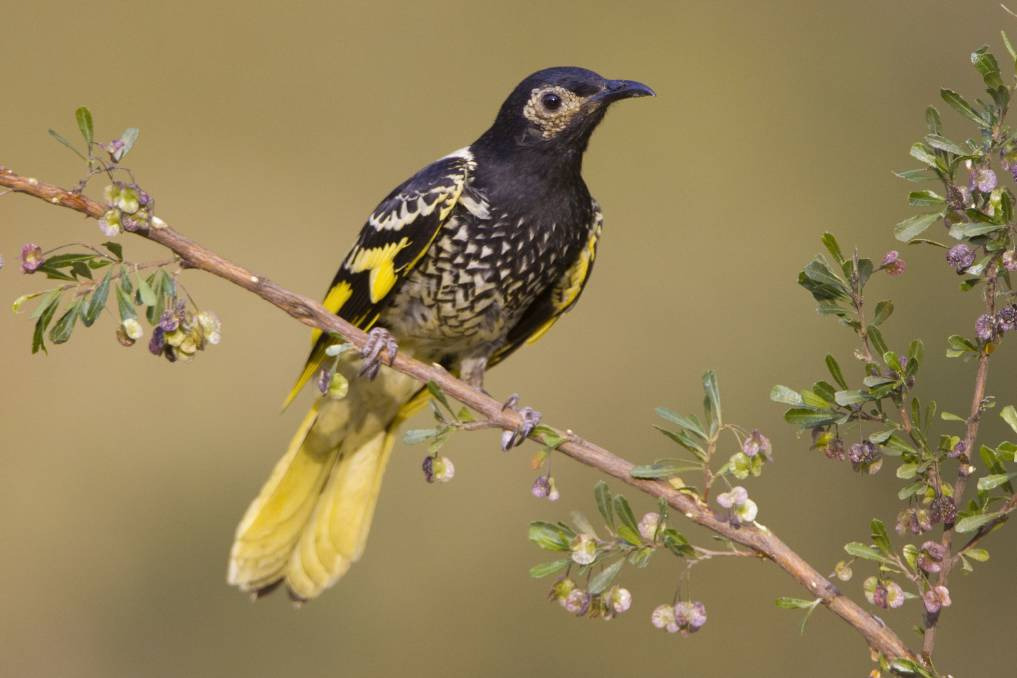 Mid-sized Honeyeater at 20-24cm long with an average adult weight of 40-45g and a wingspan of 30cm has striking black and yellow plumage: head, neck upper breast and bill are black with a featherless flesh patch around the eyes (identifying feature); lower breast and back black feathers are scalloped with pale yellow. Eye-catching tail and flight feathers are black edged with bright yellow. Males are slightly larger than females, tend towards darker plumage and have a larger featherless patch around their eyes.

The Regent Honeyeater is an inhabitant of open box-ironbark woodlands and some riparian sheoak landscapes. Historically its range was from the Queensland central eastern ranges through the inland slopes of New South Wales and Victoria, all the way to Adelaide. Since the 1980s through destruction and fragmentation of its habitat, the range – and population size – has decreased dramatically.

Regent Honeyeaters are mostly nectivorous, feeding on the high-yield nectar eucalypt species including yellow box, white box, Mugga ironbox and, to a lesser extent, swamp mahogany. They can also catch and eat small insects or spiders and will also sometimes feed on other plant matter such as flowers and fruit.

Regent Honeyeaters create an open nest in a tree fork from bark lined with softer material. Two to three eggs are incubated by the mother but nestlings and fledglings are fed by both parents, sometimes up to thirty times per hour. There are fewer and fewer nesting sites, only three are commonly known: one in Victoria and two in NSW.

Habitat loss is the single biggest threat to this species. Traditionally, Regent Honeyeaters have traveled vast distances in large, highly gregarious flocks. Through the extreme loss of habitat, these flocks have become substantially smaller as resources have lessened. Juvenile birds have been dispersing further and younger in search of food. The regent honeyeater is said to be “the bird who lost its song”; juvenile males are dispersing from the adult males before they have an opportunity to fully learn the Regent Honeyeater vocalization (a melodic quip-quorrop-quip click) and have instead been mimicking other species.

The Regent Honeyeater is an indicator species. If the regent is present, then that is an indication that the habitat is in good health. With captive breeding programs in Victoria and NSW for wild release, there is hope that the species will not become extinct. But we humans need to act further with more land conservation and better management. 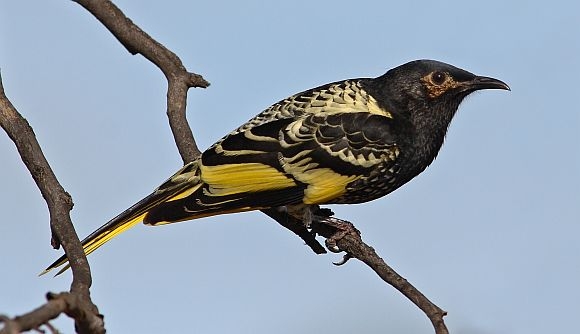 Written with information (and photographs) accessed from:

← Fauna Feature: The Pale-headed Snake Plant of the Month - Of Serpents and Spinifex →