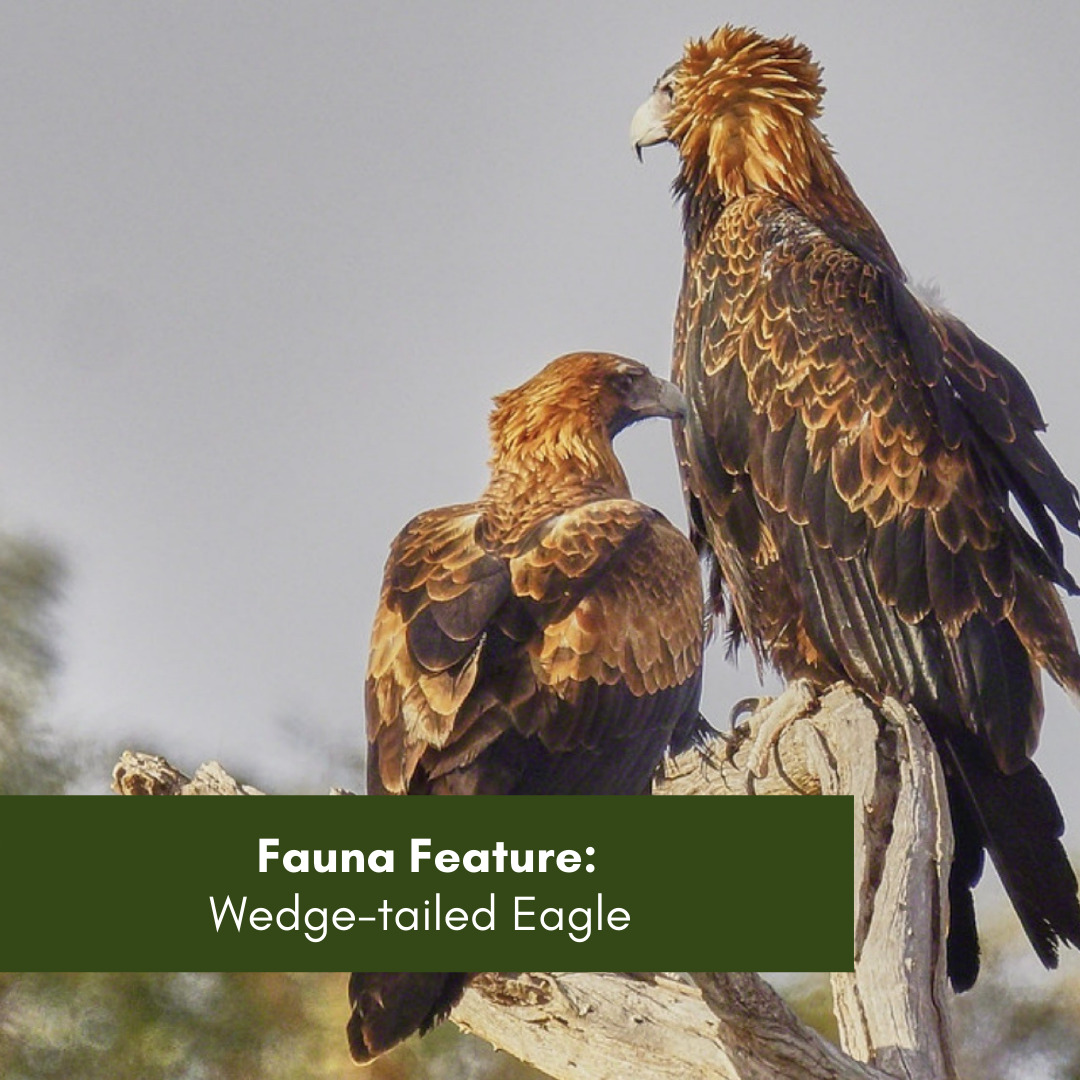 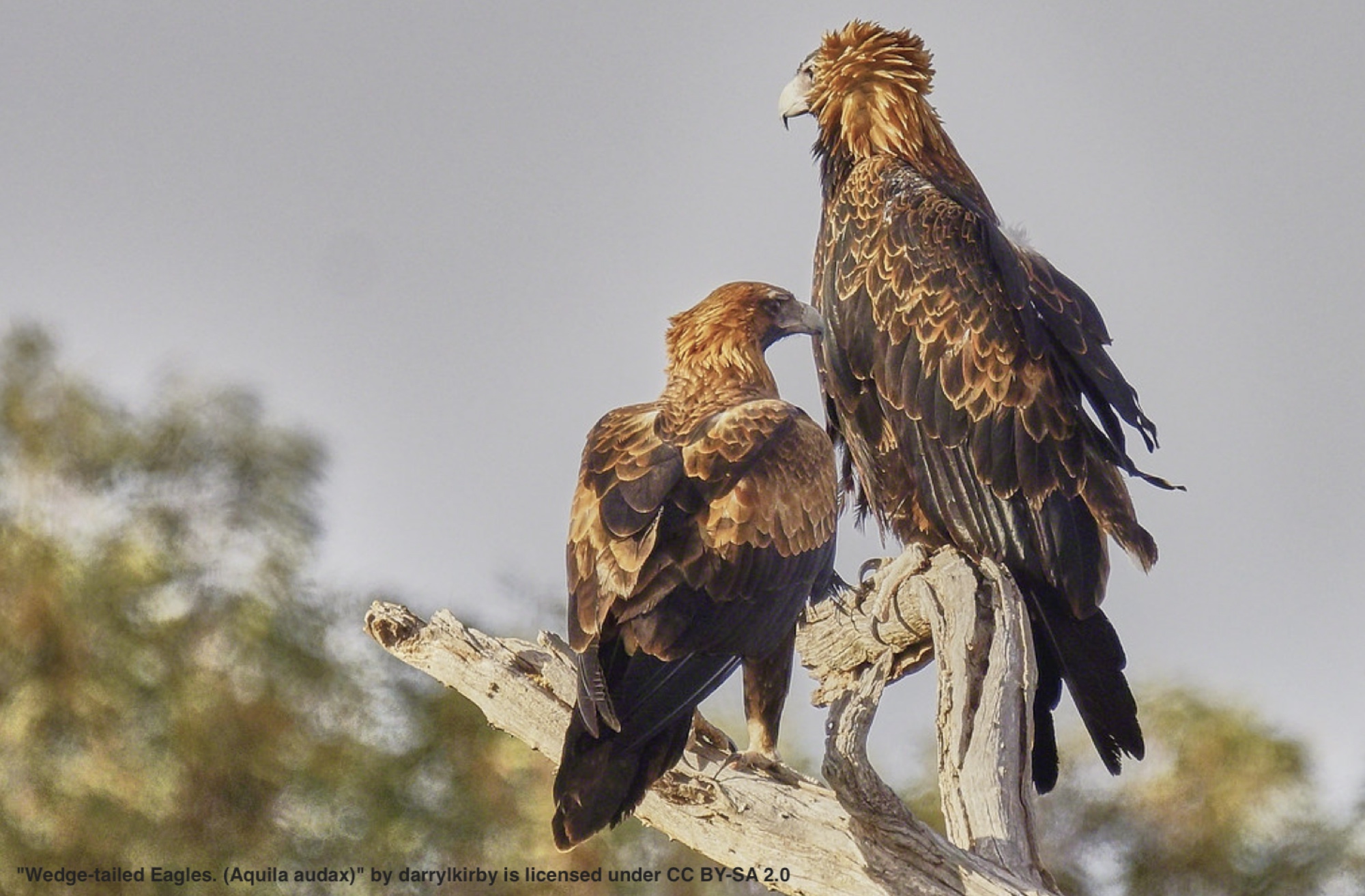 When wedge-tailed eagles are flying, you can easily identify them by their size and distinctive wedge-shaped tails. The female wedge-tailed eagle is the largest bird of prey, endemic to Australia, and amongst the largest eagles worldwide (wingspan 2.3 m). They have characteristic feathered legs down to their toes. Wedge-tailed eagles are primarily black or dark brown. They possess a large pale pink beak with dark brown eyes and white feet. Their head is also distinctively flat. You cannot easily distinguish the differences between males and females by looking at their plumage as females are only slightly paler than males. However, juveniles are typically browner and possess a paler head compared to adults. Although the mature coloured feathers only develop later when their young are 7 to 8 years old, they are sexually mature by the age of 5. Wedge-tailed eagles moult continuously but can take up to 3 years to complete a moult. They pause the moulting process when starving to prevent flight and hunting disruptions. Wedge-tailed eagles are not often heard. Although, vocalisations have been recorded close to the nest and while flying, they are hard to hear unless you are in close range to the birds. The sounds are described as high thin whistles, other whistling, yelping, and squealing sounds have been reported during the breeding season.

Wedge-tailed eagles are found everywhere in Australia including Tasmania but are more common in southern and eastern Australia. They are found in low density in the aridest parts of the continent. They are adapted to different habitats such as woodlands (Acacia, eucalyptus, casuarina trees), savanna, heathlands, grasslands, arid lands, subalpine forests, montane grasslands, monsoon forests, dwarf conifer forests, low-density rainforests, wetlands, and coastal lands. Wedge-tailed eagles are often flying over hills, mountains, and escarpments. They avoid dense forests in general but have still been seen close to the edges. Similarly, they strongly despise intense urban or cultivated areas. They tend to avoid humans in general but have progressively been seen close to human settlements.

Wedge-tailed eagles can fly up to 2km above sea level, but a few have been seen flying at more than 3km. They beat their wings loosely but powerfully and remain effortlessly stable in strong winds. Despite their strong stature while flying, wedge-tailed eagles spend most of their time perching from lookout sites such as trees, rocks, and cliffs. At noon, when the sun is at its most intense state, they soar high in the air following thermal currents rising from the ground. Their vision is three times sharper than humans and they can see ultraviolet wavelength. 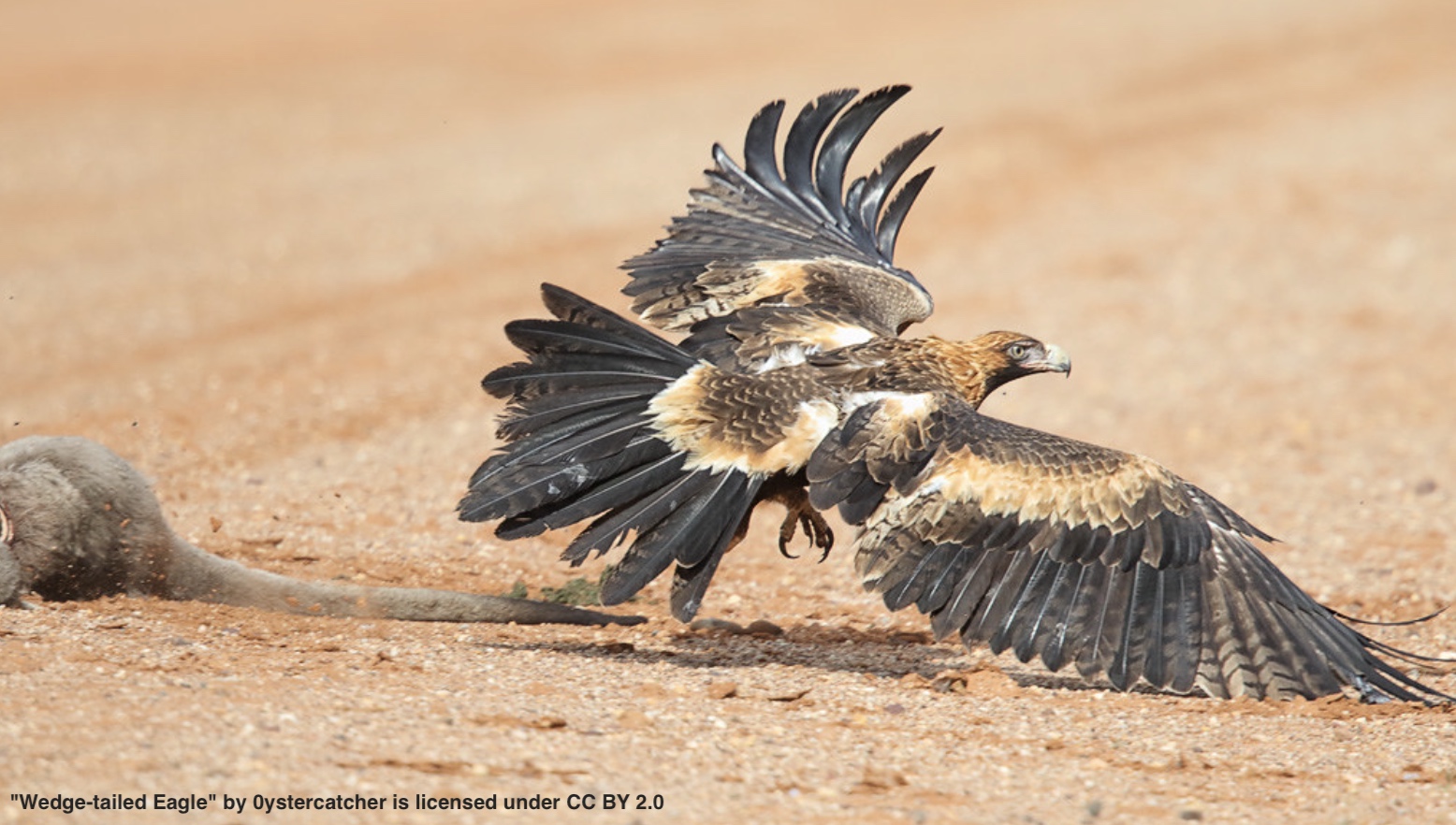 Wedge-tailed eagles are commonly sedentary but juveniles migrate 200km away but some records distances of nearly 900km. During droughts or winter, adults display nomadic behaviours. Wedge-tailed eagles in NSW move to the snowy mountains throughout the cold months. If human gliders dare fly over their territories, wedge-tailed eagles reportedly attack them to defend as they will do for any other eagle. There have also been records of attacks against drones or other unmanned aerial vehicles. Wedge-tailed eagles may cause panic amongst other birds such as magpies that do not hesitate to be aggressive against the eagles to protect themselves. However, the eagles in response rarely engage in a direct fight against their aggressors. They have also been seen to play with dogs by floating above until the dogs’ bark in response, to which they repeat the game.

Wedge-tailed eagles are one of the most powerful aerial predators in the world. They mostly feed on the decaying flesh of dead animals from roadkill or other carcasses. They prey on a wide range of animals (200 species) such as possums, other birds, kangaroos, wallabies, young livestock, reptiles, and dingoes… Although introduced species have been majoritively detrimental to native Australian species, wedge-tailed eagles are one of the rare that benefit from them (e.g. feeding on rabbits, feral pigs).

Prey can be detected up to 1km away. They glide towards their prey and grab it. They observe the course of wildfires or farm equipment such as tractors to catch fleeing animals. Wedge-tailed eagles also hunt large animals in groups. As another sign of their advanced intelligence, wedge-tailed eagles have been observed to cover large heavy prey under leaves to hide them away and return to it later. 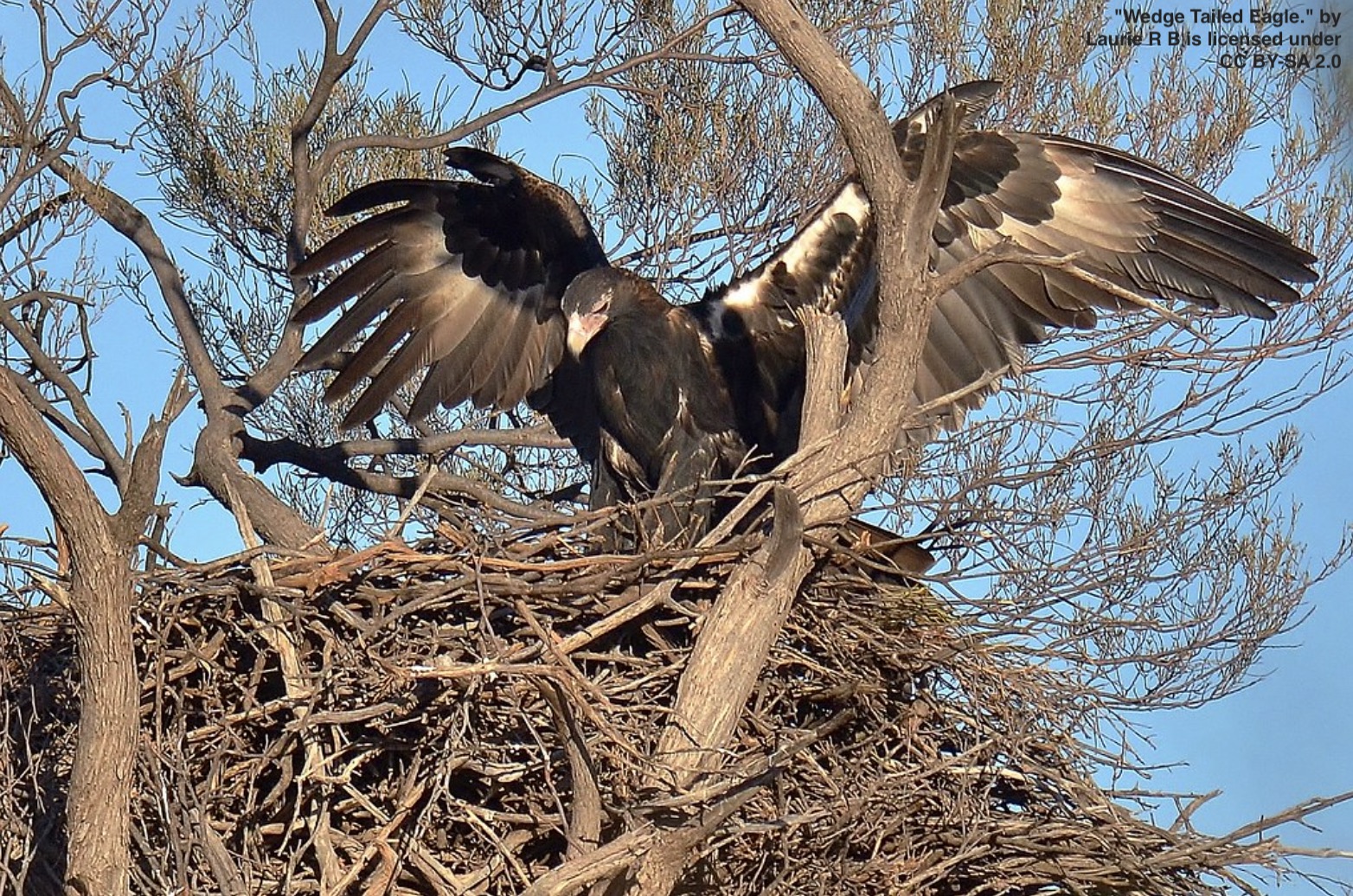 Wedge-tailed eagles breed from July to December. Adults commonly stay in mated pairs for life. However, if one from the pair dies, the other will find a new mate. Their nest is relatively large and made of wooden sticks that they will recycle to build new nests for years. Nest can be as large as 1.8m across and 3m deep and weigh up to 400kg. Females lay 1 to 3 eggs that hatch after 45 days of incubation. Chicks obtain feathers within two weeks. Adults barely defend the chicks but rest assured, they can defend themselves if required. When 11-weeks old, they depart from the nest and disperse to new suitable habitat. 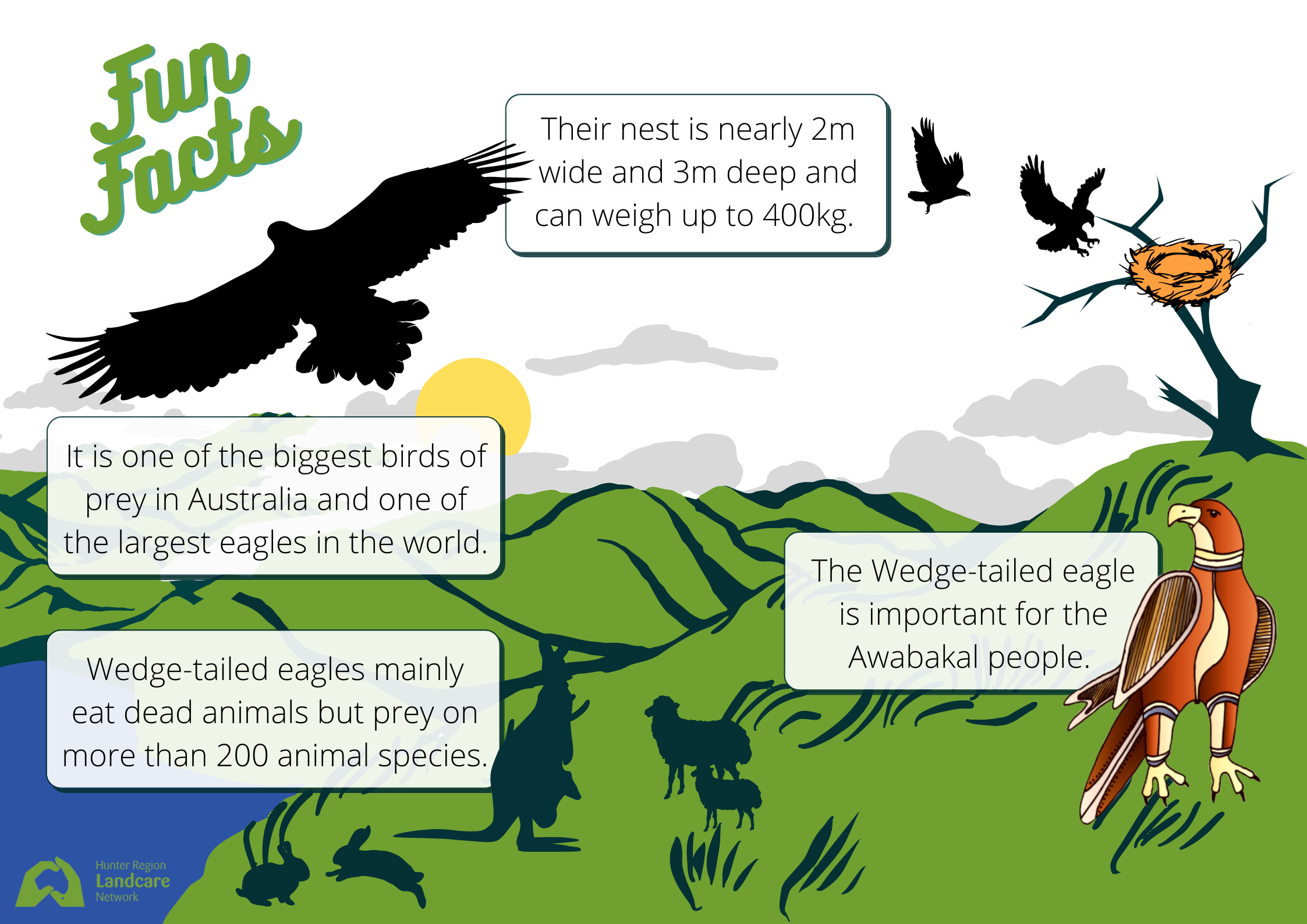