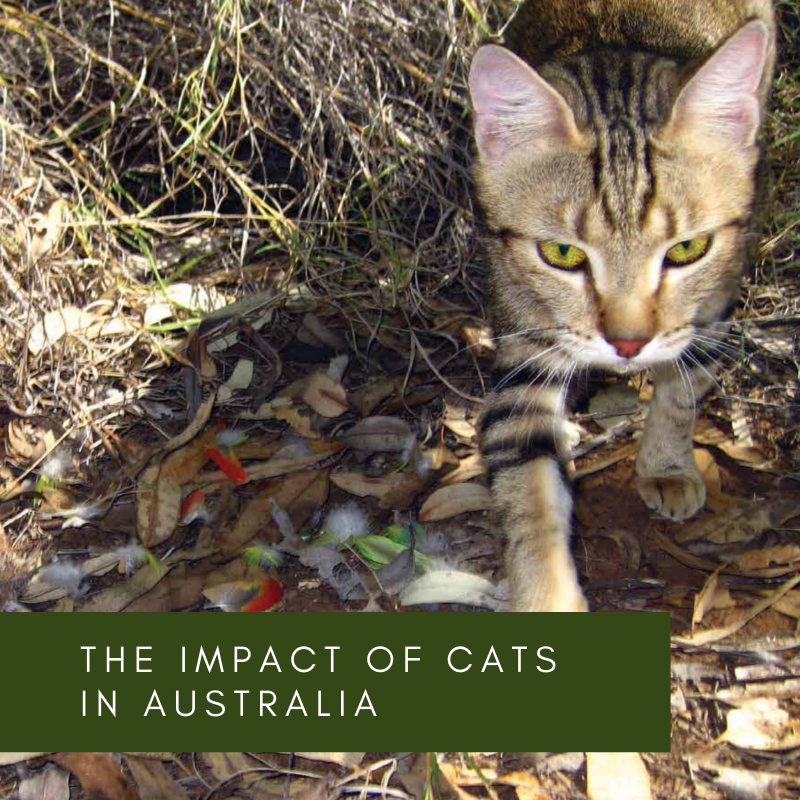 The impact of cats in Australia

This recent research article (see below) by the Threatened Species Recovery Hub really woke me up to the devastating effect that cats (feral and pet cats) have on our native biodiversity.

Some key takeaways that I found very interesting:

-Domestic cats were introduced to Australia with the First Fleet in 1788, with many subsequent introductions around the mainland and to many Australian islands. Cats now occur in all habitats across Australia and occupy more habitats than all other introduced mammals, such as foxes and rabbits.

-Cats, as carnivores, take a very wide range of prey, including invertebrates, frogs, reptiles, birds and mammals, from small beetles to mammals almost as large as themselves (up to about 4 kg which is the size of small wallabies).

– Most of this toll is caused by feral cats living in the bush (72%), but feral cats in towns, and pet cats, also kill large numbers of animals.

– The number of vertebrate animals killed per cat is highest for feral cats in the bush, at 748 animals every year.

– Feral cats in towns kill fewer vertebrate animals per capita (449 animals per cat per year) because intentionally or otherwise humans also provide them with some food.

– However, because feral cats in towns and pet cats live at higher densities than feral cats in the bush, their kill rates per square km are actually much higher.

– Cats also kill introduced birds and mammals, especially rabbits and house mouse, however they rarely control populations of these introduced pests. High densities of rabbits and introduced rodents also allow cats to reach high densities, which means that even if those cats take only a small proportion of native animal species in their diet, the toll on native species will still be high.

– Fencing has been used successfully to exclude cats and foxes from small areas on the mainland, into which threatened mammals can be translocated.

-Virtually all cats, even well-fed pet cats, will hunt and kill wildlife if given the opportunity, day or night.