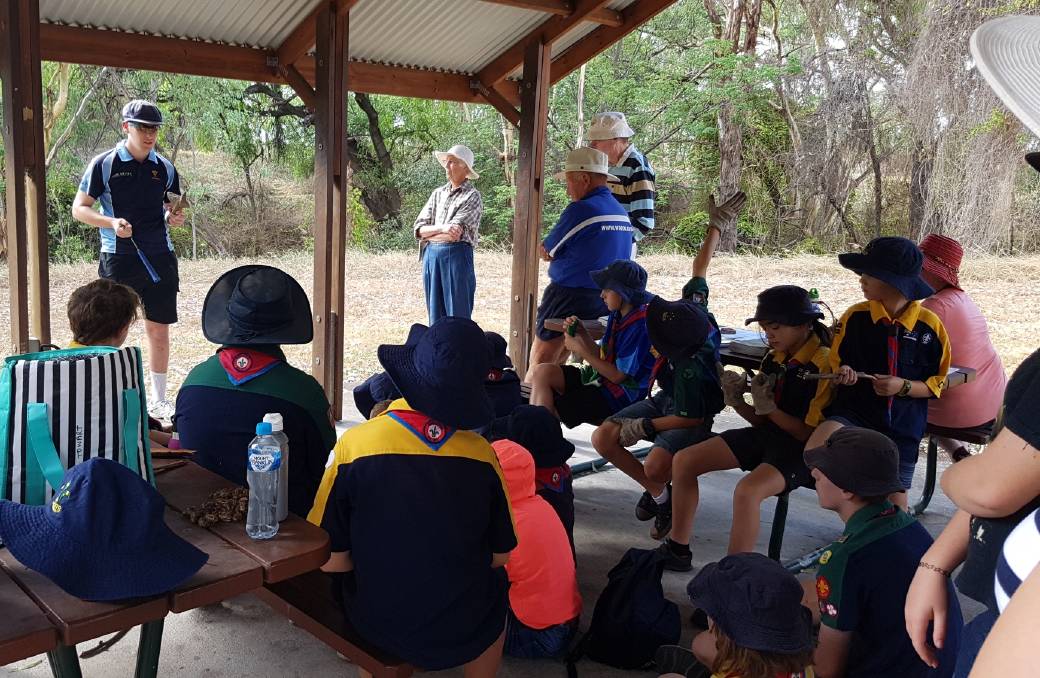 After the success of Rock’in the Park, the Singleton Shire Landcare Network (SSLN) are keen to see more local residents appreciate, and care for, Col Fisher Park.

Travis with the joeys and scouts.

With it’s magnificent river red gums and intriguing Glendonites, the reserve at the end of Wilkinson Boulevard would greatly benefit from a “friends of the park”, or similar group, being formed.

But what are Glendonites you may ask?

Well this is exactly what geology student, Travis Batch, discussed with the 40 people who attended the Landcare workshop on Saturday, February 17.

His enthusiasm for the subject capturing the attention of the younger members of the audience – some of our local joeys and scouts.

They were fascinated to hear how these star-shaped pseudomorphs were formed and asked plenty of “astute questions”.

SSLN member Helen Stacey says Travis did not hesitate to use technical words as he explained how Ikaite morphed into a glendonite.

“He told us glendonites can be found nearby, and were named after the local area of Glendon where they were first identified in 1840,” she explains.

“After listening to the complex theory of glendonite formation the group then moved to the location where they can be seen in mudstone. They were also taught how to recognise drop stones that were moved many years ago by an active glacier.”

“After drinks and snacks I showed everyone how to identify the weeds that are a threat to the native flora in the park, like the amazing trees river red gums which are rare and endangered in the Hunter Valley.”

“Then, keen for some action everyone selected gloves and tools and collected weeds and rubbish to help make the park a better place.”

SSLN chair Alex Smith says it would be great if the interest and energy of these young people could be maintained.

“We would really like to see a local group use the park as a base for regular social gatherings and do minor improvements,” he says.

Mr Smith has refurbished the eye catching Landcare trailer and it is now fitted out with an extensive range of useful tools ready for community use.

Local Landcare coordinator Stacy Mail can be contacted on 0429 444 305 and is willing to assist in setting up a “friends of the park group”.