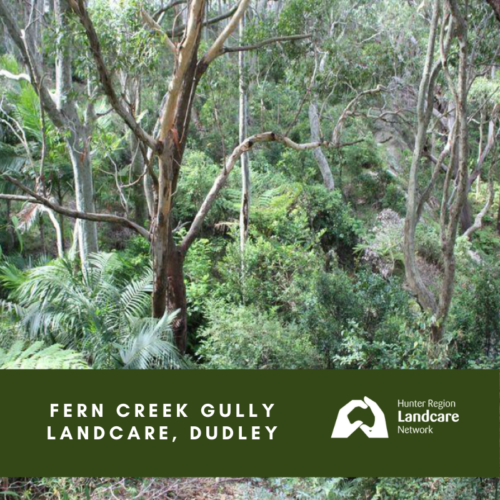 The Fern Creek Gully Landcare group formed in 2003 following the encouragement of the Lake Macquarie Landcare Coordinator (then John Hughson) and interest from neighbours in recreating a rainforest gully. Peter Dalton is the Landcare Team Leader and he works with about a dozen neighbours, family and friends on regular seasonally chosen periods based on rainfall and temperature, with autumn, winter and early spring being the preferred times.

An illegal fire lit by rock fishermen to clear bitou to gain access to the beach in the Awabakal Nature Reserve, inadvertently provided the opportunity for the Landcare works to commence. The low intensity fire burnt much of the bitou and reduced the bitou seed, providing the opportunity for the native seedbank to flourish in the burnt area. This showed the group the resilience of the site and what could be achieved.

A decade of Landcare action has converted a small, mining degraded, weed infested site into a thriving rainforest of considerable complexity.

A successful project is critically dependent on the enthusiasm of a host of contributors. Also ensuring safety of all when on site has been probably the most regular requirement.

Peter Dalton moved to his property in 2002 and started clearing the bitou and lantana surrounding his house to reduce fire risk. To harness the regenerative quality of fire and to deal with the large amount of dead bitou and lantana on site, the group worked with contractors to drag the material to the creek gully to be burnt. Due to the total fire ban at the time, a written case was required by the NSW Department of Planning to show that the burn was for Landcare purposes and would be carried out by the Charlestown Fire Brigade. This burn was very successful and eliminated almost all the Bitou seed in the creek line Following the burn, the site got a surge of other invasive weeds, including tradescantia, asparagus fern, morning glory, vetch, crofton weed, blackberry, moth vine, turkey rhubarb and cobblers pegs. These weeds competed to fill the space previously occupied by Bitou and Lantana and led to a decade-long spraying and hand weeding exercise to eliminate them and their seed bank from the site. After a 200-300mm thick layer of mulch failed to supress the Trad, the group removed 30 bags of the weed by hand. Trad is a constant challenge for the group as, although the growing rainforest trees help shade out many other weeds like cobbler’s pegs, they help create the perfect moist and shady environment for the Trad.

The group planted vegetation barriers of Lomandra longifolia, Goodenia ovata and Westringia fruticosa, and shading barriers of Acmena smithii on the western and south western edges to prevent weeds from migrating from  suburbia to the west and south. Council installed stainless steel filtration in the street stormwater culverts to reduce weed transmission from the road.

Weeds alone were not the only challenge for Fern Creek Gully Landcare site, which was suffering from drought when the group started planting. In 2006, a 60,000 litre stormwater storage and harvesting system was installed as a result of a Commonwealth Community Water Grant and significant contributions by the Lake Macquarie City Council, Rocla Pipes, H.L.Mullane Engineering, Reece Plumbing and Lake Macquarie Landcare. The total investment was approximately $90,000 and has provided sufficient water to ensure a better than 95% survival rate and enhanced growth through the years of drought.

By the end of 2010 the gully had been re-established as rainforest, with tree growth of up to 7 metres in height, an understorey of tree ferns and sandpaper figs, and a ground cover of ferns. The rainforest is now regenerating itself with planted trees producing their own offspring. The Landcare group undertook three sequences of planting to get to this stage. Although many plants from the initial plantings died, due to hydrophobic soils and lack of water prior to stormwater harvesting, the dead plants broke down with the weeds that had been treated by the group, and helped produce a healthy organic soil for future plantings.

The rainforest planting has now been extended from the gully to upper creek line. Grants from Landcare, Hunter Central Rivers Catchment Management Authority and Hunter Water assisted with ongoing planting. Fortunately, the Fern Creek Gully Project fitted well with a number of other projects that were taking place in the Dudley area. Professional input, together with the ongoing volunteer work at local sites like Ivy Street Reserve (Redhead Lagoon), Reay Park and Bimbae Landcare (the Fairy Dell) has seen a marked reduction in weed invasion, and subsequent increase in native biodiversity through natural regeneration and rainforest planting. The task is ongoing and, without the commitment of the volunteer Landcarers with the support of the Landcare Resource Office (Green Team and bush regeneration team), the Dudley reserves would still be weed-dominated.

A decade of Landcare action has converted a small, mining degraded, weed infested site into a thriving rainforest of considerable complexity and apart from occasional removal of shade loving weeds requires nothing but the pleasure of watching it evolve.  Possibly, all of us have made something which can live for a thousand years, and that is no small achievement. 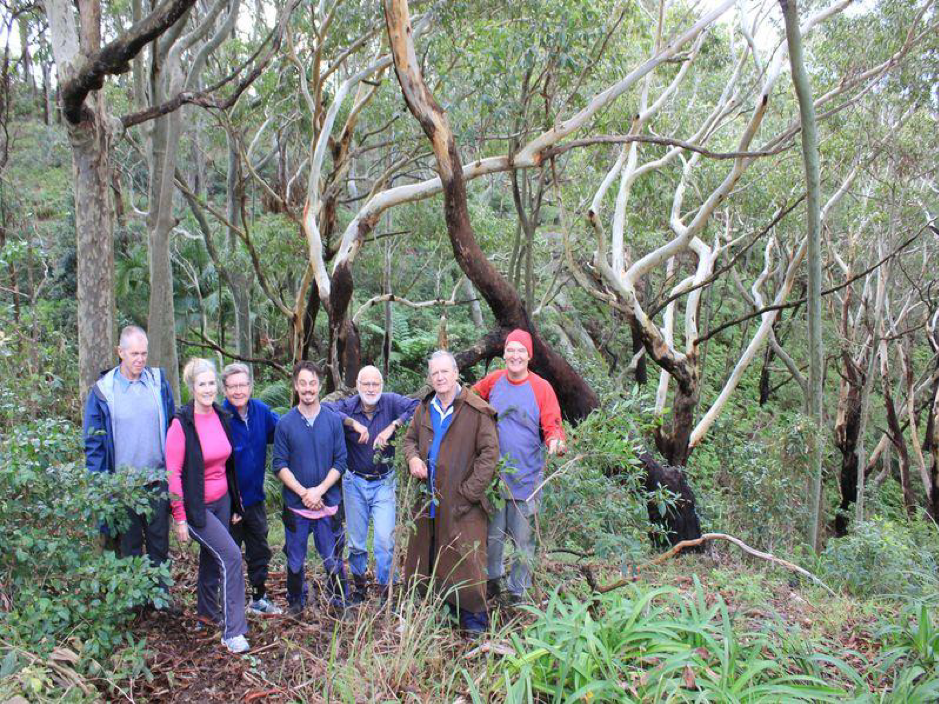 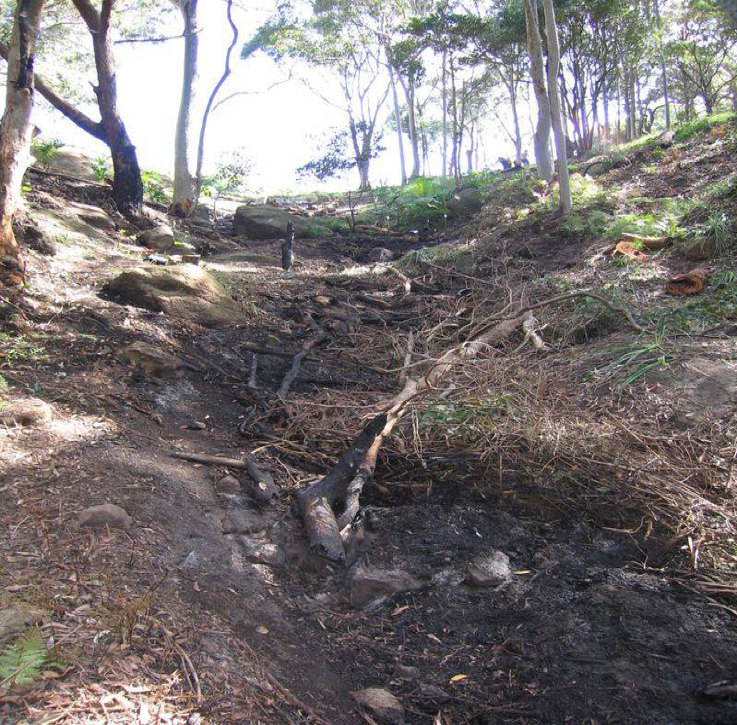 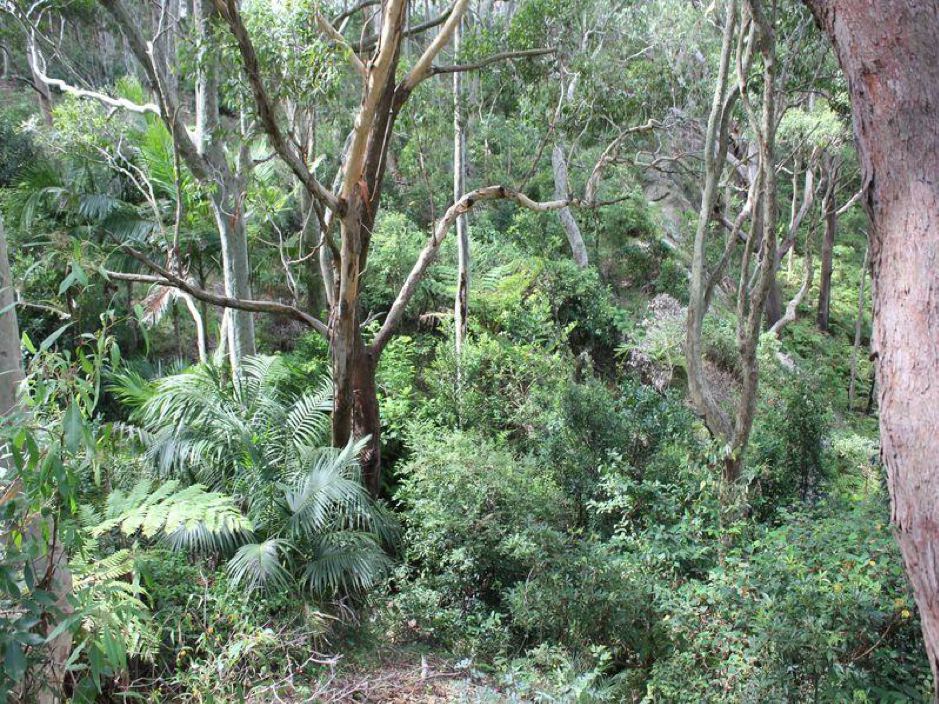 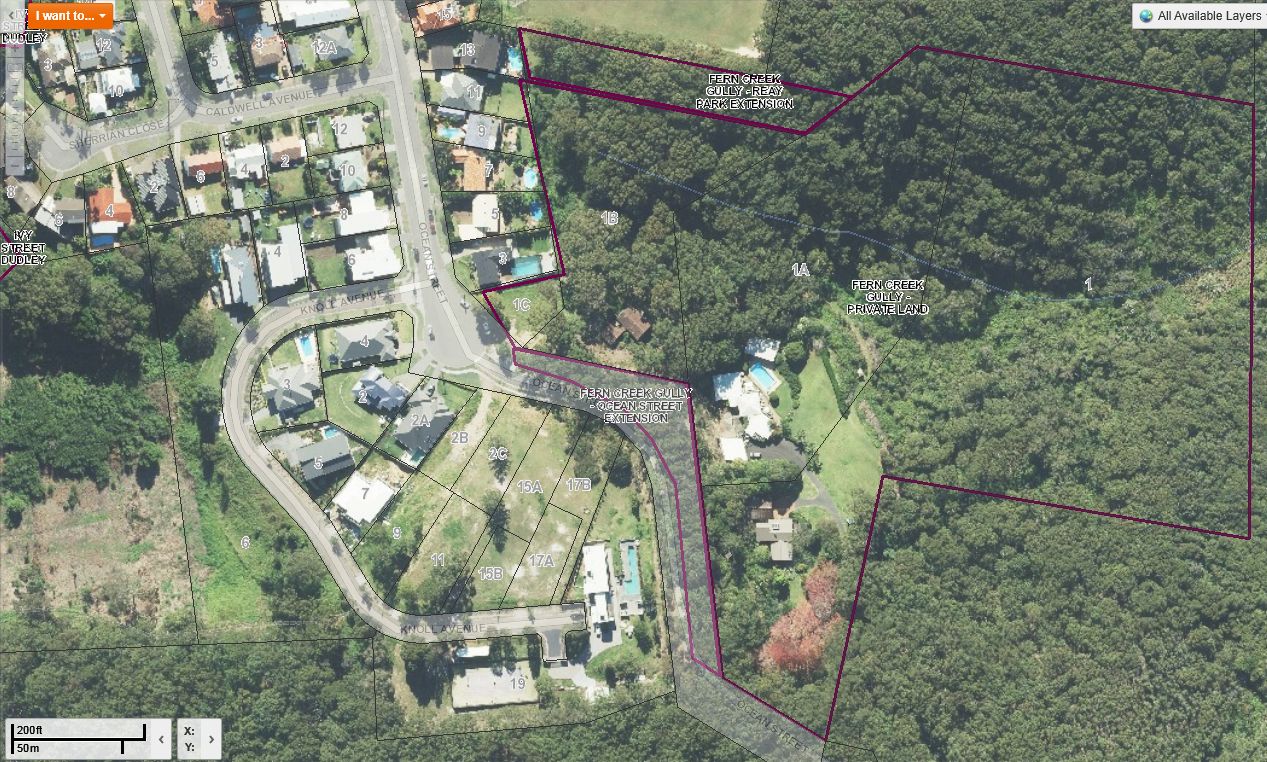