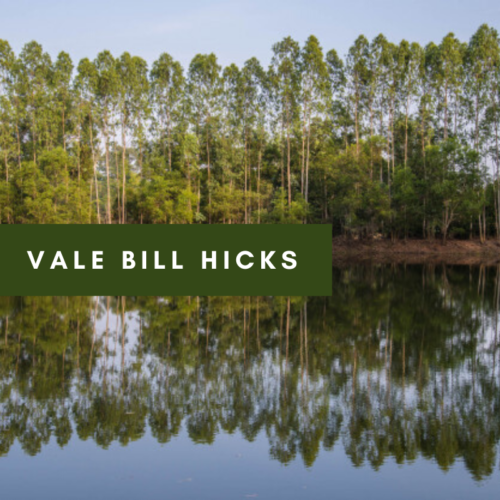 Members will be saddened to hear that Bill Hicks died last Saturday. He was 97. Bill passed away peacefully in his room at Bimbadeen Hostel in Calvary Cessnock Retirement Community. Bill led a long and incredibly full life, culminating in the 30 years or so that he and his beloved wife Betty spent living at Watagan.

Bill was a driving force in the formation of Wollombi Valley Landcare, and he became our first President. Membership quickly grew and early activities included informative meetings and planting days on members’ properties, often with plants that Bill and Betty had themselves grown. From their bolt hole on Watagan Creek, Bill devised a system of growing native plants in 50mm tubes, using a specified feed regime and air pruning. After fourteen to eighteen months, the resultant longstem plants could then be planted deeply and watered in, enabling the plant to grow sturdily and to resist weed inundation. Along watercourses, it also meant that the growing plants would not be knocked over, or torn out, by flood events.

While Bill’s revolutionary planting system was initially greeted with scepticism in horticultural circles, the Hunter Catchment Management Trust and NSW Department of Land and Water Conservation trialled, and then backed, Bill’s work on revegetation projects in the Hunter. By the mid-nineties, the longstem planting system had expanded to other parts of Australia, with Bill providing consultation. Ultimately, longstem growing and planting has been used with non-Australian plants elsewhere the world, including England, Africa and the USA. Longstem was Bill’s gift to the world and is a wonderful ecological legacy.

Bill was always willing to share his knowledge and enthusiasm, not only for native flora, but for fauna as well. His earlier experience with koalas at his former home in Oatley and at Barrington Tops Guest House meant that he was well placed to advise the Wollombi Valley community about koala habitat. Members will recall the reprinted article, ‘Tree Planting for a Koala Habitat’, in the March edition of OON, courtesy of Valerie Milgate.

In the words of another former Landcare President, Robyn Lamond, Bill is a Landcare Legend. He will be sorely missed by all of us and our sympathies go to his daughters, Sue and Gail, and to their families.