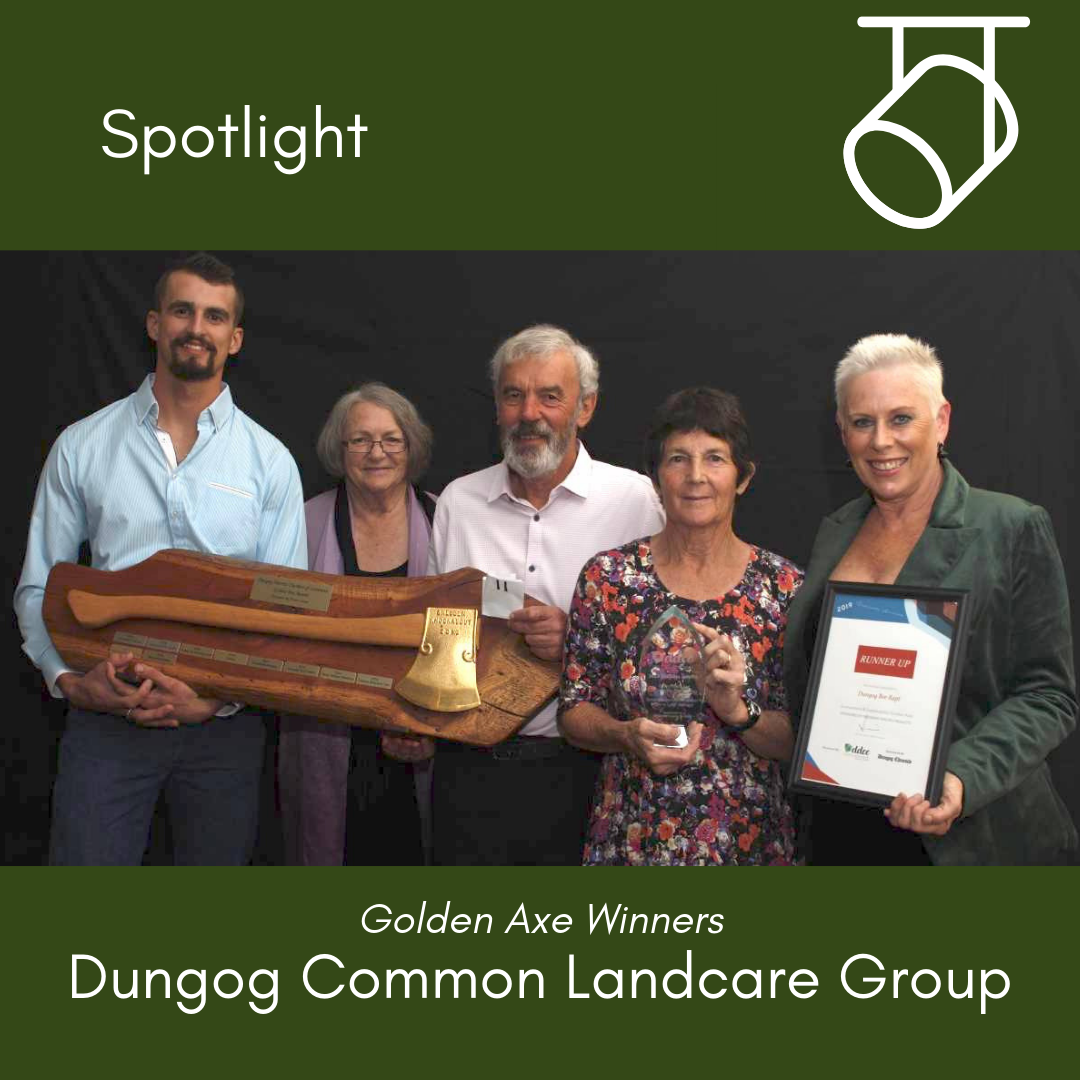 (Dungog and District Chamber of Commerce Business Awards, 20 May 2019)

On Saturday 20th May, at the Dungog District Chamber of Commerce annual presentation dinner,  members of the Dungog Common Recreation Reserve Manager (DCRRM)  and Dungog Common Landcare Group (DCLG) were awarded the ‘Environment and Sustainability Award’ also known as the coveted ‘Golden Axe Award’.  The hotly contested award was given to the parent group, the DCRRM for the massive amount of work over the past five years by the DCRRM and the Dungog Common Landcare Group and its friends. The award is sponsored by Sneddens Fencing Products.

“Dungog Common Landcare Group (DCLG) operates under the auspices of the Dungog Common Recreation Reserve Manager (DCRRM) or what we call ‘theTrust’. Our workdays are spent caring for 260 hectares (600 acres) of Crown land on the northwest edge of the Township of Dungog.

The Common has existed since the early 1800s and was part of the original town plan for Dungog but never declared a Common officially. In the 1960s the Crown took back control of the area and it was used for grazing leases. In 2009 a group was formed to lobby for return of the Common to the locals and in 2014 the Dungog Common Recreation Reserve Trust (the Trust) was officially formed to care for and use the Dungog Common for passive recreation. In the years between the 60s and 2015 weed management or erosion control work on the Common was rarely done. The Trust formed a sub-group to work on environmental issues and out of this the Dungog Common Landcare Group (DCLG) was formed.

The DCLG started the enormous work of removing long established weeds from the whole of the Common. Lantana was the obvious candidate for eradication and of course the usual prickly pear and african olive.  Driven by Ros Runcimen and Jann van der Meer, original Trust members, the DCLG put together working bees and invited locals to participate in workdays and educational days. The DCLG also had huge support from the individual Trust members and local landcare enthusiasts with their working bees and they put in hundreds of volunteer hours physically removing weeds.

Signage and barricades were used to control the driving of 4×4 vehicles over the Common and thereby reducing the cause of large areas of erosion. Fencing was also used to restrict the grazing cattle and public who use the Common from accessing areas of greater sensitivity.

In the early days the DCLG also applied for and was granted three Green Army grants from the Federal Government. Ros and Jann directed these working groups to remove target weed species and re-establish native plant diversity in the riparian areas. This work began the long term effect of slowing the creeping erosion along the creeks.

Our DCLG has also had the benefit of working closely with individuals and groups from Hunter Local Land Services. People like Joe Thompson, Mick Budden, Lorna Adlem and Gavin Farley with his crew of volunteers, just to name a few. Their knowledge experience and wisdom has given much needed guidance over the years.

Bill Dowling was our first DCLG president. Bill is a widely known ecologist and a guiding force with our Landcare group. Over the last 5 years Bill has identified several species of plants on the Common that are listed as rare or endangered and recently found two more types of tree that he is working to have verified and his constant work and expertise increases the environmental value of the Dungog Common.  Bill is also tracking and mapping the increased sightings of native animals and birds who appear to be returning to the Common.

The winning of the Golden Axe Award is a reminder to us that what we are doing is important and worthwhile. It tells us to keep going, we are winning. The knock on effect is the award draws attention to the Common and what we are trying to do there. It may inspire people to come to the Common and spend some time there, have a picnic, ride your bike or your horse along our 24 kilometres of  trails or around our open spaces. I hope it encourages parents to bring their children to adventure through the bush and along the creeks, or photographers to capture the beautiful native animals and trees. The use of the Common is on the increase by a cross section of the community and some come from distant places to visit. We see this as an important outcome and somewhat exciting, after all, the Dungog Common and any award it may be given belongs to everyone”.   by Clare Shrimpton , 17th June 2019