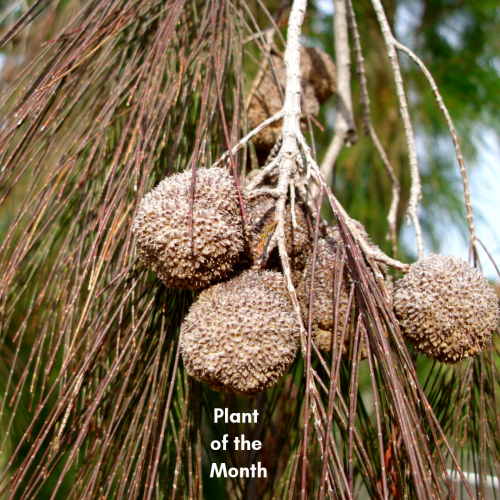 This one’s one of my favourite trees, the Forest or Mountain Oak (depending on where you live) is typical of the Casuarina family with its needle-like leaves. While often mistaken for a pine tree is within the flowering plant group (Angiosperms or Magnolipsida) rather than the non-flowering (Gymnosperms or….). Like most of the Casuarinaceae it is wind pollinated and has male and female flowers on separate trees. Unlike pines, which it superficially resembles, the needles can be pulled into sections with the number of “teeth” on an individual “article” used for identification. The Forest or Mountain Oak can be identified by its brown corky bark, round fruit (cones) and four or five teeth on the article needles. 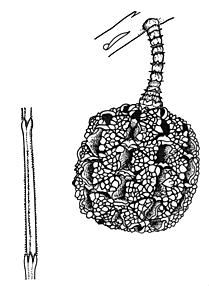 The Mountain Oak has very dense honey coloured “oak-like” grain which makes it popular for decorative timber work. It is also one of the hottest burning timbers in the world and it’s low ash content made it a favourite with bakers. The timber was also used for shingles and is notorious for blunting the blades in sawmills. In coastal areas, it rarely exceeds 10 metres and is a mid-story component, in mountainous areas it can get to 20 metres or more with trunks of 1-metre DBH (diameter at breast height) or more not uncommon.

Casuarinas are nitrogen fixing (with Frankia rather than Rhyzobium bacteria commonly found with legumes) and were split into Casuarina and Allocasuarina a couple of decades ago, Casuarinas having 6 to 20 teeth on their articles and grey or yellow seeds, Allocasuarina having 4 to  14. Casuarina refers to the similarity of the drooping leaves to the feathers of the Cassowary.