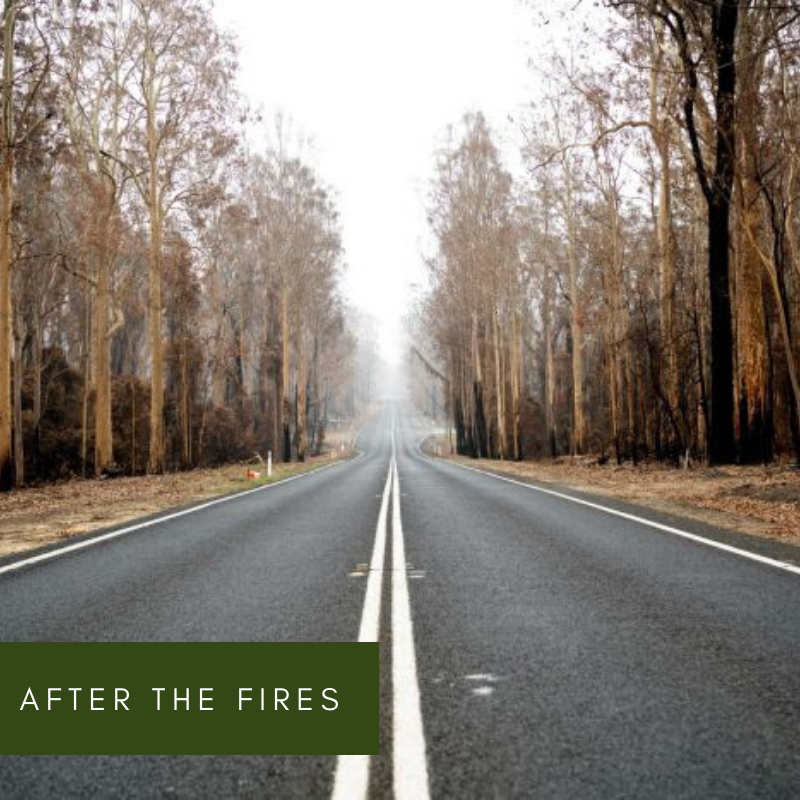 Once the flames die down and the smoke clears the question arises “what now?” Now that the adrenaline has flushed out of the system and you face a whole new blackened landscape, it can be more daunting than when the fires were burning. At least then there was only one thing on our minds, and that was to stop the fire but once that’s gone there’s the come down, the emotions to process and deal with and then the pieces, both physically and emotionally to pick up and put back in their places.

The blackened landscape which confronts us every day is a reminder that things aren’t as they were and there’s a desire to get in and fix it to get things back to normality as quickly as possible.

What we also see, if we wait, are signs of recovery, epicormic growth bursting from buds hidden deep under thick bark, growth from lignotubers and germination of seeds buried in the soil waiting for their time.

While it’s tempting to go out and start replanting to help Mother Nature along there are some things we can do.

Watering Points
These can be as simple as a plastic basin with a couple of rocks to save small animals from drowning to the slightly more complex self filling pvc watering stations we’ve seen around the place. Put the watering point somewhere shady to keep the water cool and minimise evaporation.

Erosion Control
With lots of bare soil and ash around, the risk of erosion and subsequent effects on waterways is greatly increased. Sediment fences*, coir logs and brushmatting will slow water flow and catch muchof the sediment and stop it from reaching waterways (*hessian will eventually break down and is preferred where it’s unlikely you’ll be back to remove the fence; hessian can also be pinned to the ground to provide groundcover).

Fencing
Now that things have opened up a bit it’s probably a good time to think about fencing needs and best places to build them. If you’re in an area with a lot of wildlife then wildlife friendly fences would be a good idea, that means minimising the use of barbed wire and allowing wildlife to pass under or through the fences with minimal damage to them or the fences.

Weed control
While there will be lots of native plant germination there’s bound to be lots of weeds germinating as well, now’s a good time to familiarise yourself with what the weed seedlings look like and control them before they get out of hand (oh, and googling “weed seedling” may not necessarily bring up the results you want, don’t ask me how I know this).

Monitoring
Setting up some sort of monitoring program to measure recovery is also a good idea, cameras can be set up to monitor wildlife coming in to drink, photopoints can give a good visual guide to the recovery process and setting up full quadrats and transects to measure the full floristics can be done as well. The latter of these requires some good vegetation identification skills (and patience) particularly identifying from a seedling stage but gives great information on the recovery process.