Tilligerry Habitat Reserve is a 9 ha flora and fauna reserve along a sandy foreshore on Tanilba Bay between the townships of Tanilba Bay and Mallabula. The Reserve is managed by the Tilligerry Habitat Association, a not-for-profit community organisation.Tilligerry Habitat Reserve was part of deep sand mining by dredge that started near Mallabula Sports Field in the 1960s that left the area very disturbed. Most of the mined land  became playing fields or houses. In 1992, a meeting was called to decide whether the derelict site that became Tilligerry Habitat should become a caravan park. There was a significant strip of remnant forest on the foreshore and a caravan park would further compromise this forest. An alternative proposal for the land was submitted by Jean Olley, Jan Dunbar and Harold Richens which was the vision of Tilligerry Habitat which has guided all subsequent activity on this site. For about 3 years a number of us met regularly trying to get the land protected for the environment and community.

Natural resource management can be quite challenging.

In July 1996 the land was gazetted by the NSW government as a reserve for public recreation and coastal environmental protection. It was the first protected land on  the Tilligerry Peninsula.

Sandmining removed the dunes and left the land flat destroying drainage lines. One of the first tasks was to redig the creeks. Mulching and revegetation has transformed the site into a self-sustaining area with a range of vegetation communities close  to what it was like before sand mining; swamp mahogany and paperbark  forest, heath and woodland, wetland and foreshore environments.

In 2011, Tilligerry Habitat received NSW government Envirotrust funding to remove weeds and replant native species on 10 sites across the Tilligerry Peninsula. Members and volunteers have worked tirelessly on the site since 1993 to restore what was once a sand mine. Today the site boasts a straw bale Environment Centre, a native nursery which has supplied some 3000 food trees to Port Stephens koalas, easy walking tracks and boardwalks for locals and tourists access the site,

Tilligerry Habitat has won several awards; Tidy Towns, Tourism, Regional Awards for over 20 years. It provided an active Environment Centre for some years. Its focus now is more on tourism. Many grants have been brought into the community, a little employment at times and significant numbers of tourists seeking koalas. 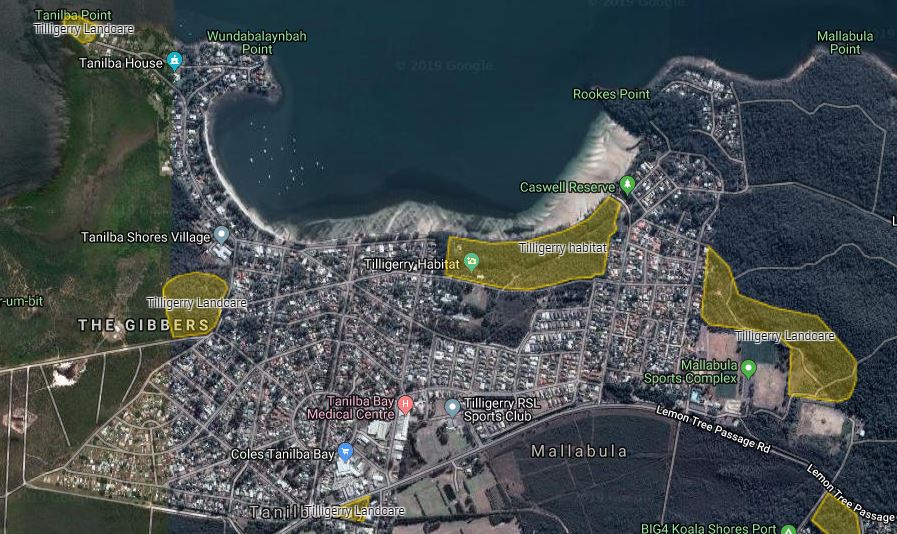