Standing under the Mistletoe

Standing under the Mistletoe 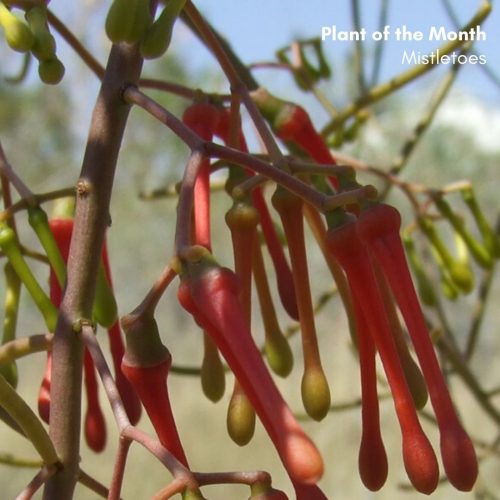 …waiting (and waiting, and…)

An interesting group of plants are the Mistletoes, parasitising their host trees for water and nutrients they are an extremely important part of the ecosystem. While an over infestation of them can kill the host plant they provide food for a number of insect, bird and mammal species.

There’s around 1400 species of Mistletoe worldwide and about 100 in Australia, they are usually host-specific and will often mimic the host plant. The flowers produce a single sticky fruit which is eaten by (among others) the Mistletoe Bird, after passing through its digestive system the still sticky seed is wiped from the birds bum onto a branch where it can germinate. Apart from the fruit and nectar, the leaves provide food for possums (and cattle if they hang low enough) with the proliferation of mistletoe common in areas where possums are scarce. Anecdotally possums died out in many areas after the poison was used to kill the rabbits, possums would come down from the trees, eat the poisoned carrots, die and mistletoe would proliferate, another example of a “trophic cascade” where one action can have unforeseen consequences in an ecosystem.

Mistletoe was used medicinally either by placing it on the affected part or by drinking a decoction of the plant. At various times in various parts of the world it has been used to treat epilepsy, the bites of mad dogs and wild animals, strained muscles, toothache, sores, itch, weakness of vision, impetigo, dandruff, regeneration of lost fingernails, common cold, ulcers, poisoning, promotion of muscular relaxation before childbirth, to hasten menstruation, treat warts, snakebite, fever, syphilis, beri-beri, ringworm, headaches, gout and worms. In England, if a child had intestinal worms, he/she was given bark of mistletoe taken from an oak tree, powdered in warm milk, and the worms would supposedly die exactly nine hours later.