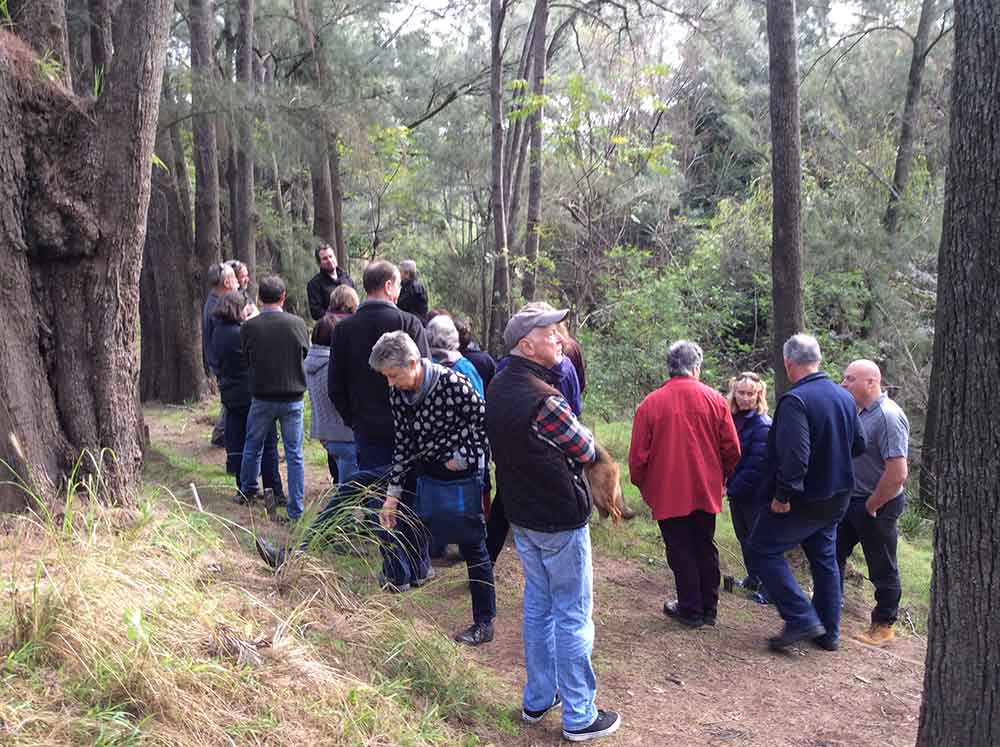 Held at Wollombi School on Saturday 18 th June from 10 am.

Twenty five people attended today which began with the landcare AGM which was a huge success with all positions filled, and was followed by our workshop on Riparian Erosion management.

One guest speaker, Mick Budden from Local Land Services, shared some of his knowledge on Riparian management. He discussed understanding riparian processes and rehabilitation of river banks after flooding. Our rivers systems are dynamic and ever changing with floods, erosion and stream adjustment, which can be amplified by character and conditions of the individual river, eg, lack of vegetation.

Erosion is more prevalent along sandy valley floors, rather than rocky more elevated streams. Vegetation is needed with a variety of canopies and a mixture of shrubs and grasses. Lomandra is ideal and contributes to stabilising the banks.

There are different types of erosion. One type being slumping erosion, where a high water table and a flood causes collapsing which is common in our area. Sheer water force creates head cutting in gullies.

Leave fallen trees in the waterways to create channel diversity which provides habitat to water animal life. Also, this encourages other plants to take hold and grow.

Persistence is the essence to riparian management. Plant the pioneer species first which grow quickly. Some include casuarinas, wattles, red ash, callistemons and water gums, There will be floods with each being different to the last. Eventually the planting of vegetation will take hold and lessen future erosion.

It is important to control the rate of flow to prevent flooding downstream where rivers meet. A healthy river or tributary will slow down the force of the water.

Rivers heal themselves but need our help.

After Mick’s presentation we walked along a section of the Wollombi Brook which Landcare has been rehabilitating. Greg Major, a local Ecologist, joined us and added his expertise and observations concerning our efforts. Mature Casuarinas are a feature of this section of river and have been the backbone of the rehabilitation efforts.

Native species that have been planted include White Cedars (which are now controlled as they are in large numbers), Callistemons, Breynia, Water Gums. Lomandras, Dianellas etc. A major feature of the area is the success of the native grass Micoleanea Stipodes which has proven to be a great ground cover and “ living mulch” . This is important because large areas of Tradescantia have been removed leaving bare sandy soil which is vulnerable to erosion when the river floods.

To partially guard against this areas are cleared in a patchwork quilt pattern so as not to expose too large an area all at one time. And we have also selected flatter areas first to rehabilitate, these being less prone to erosion than steeper sections. Steeper sections are not cleared, but rather planted into with colonising species, with the aim to get them established prior to later rehabilitation works. Privets are poisoned “ in situ” so as not to disturb the soil and also to negate the need to deal with large amounts of biomass. Cleared areas are densely planted with a range of native plants, with ground covers being a high priority.

One area at the toe of a bank was over cleared and has been badly eroded. It was recommended by both Mick and Greg that the area be densely planted out with Lomandras with half metre spacing.

Many people were interested in the type of plantings that have been used along the brook and that is a focus of our aim to make the site an educational tool. We had placed name “tags” alongside some plants in the past, but these need to be replaced due to the action of floods.

Following the walk/talk we went back to the school for a BBQ where John Hughson gave a talk on the work of the Hunter Regional Landcare Network as well as outlining the efforts of Adam Dwyer, our Local Landcare Coordinator.

All in all it was a great day the was well attended ( there were a good half dozen new faces) with a good outcome. Thank you to Mick, LLS, Greg, John and HRLN for helping make it an enjoyable and rewarding day.