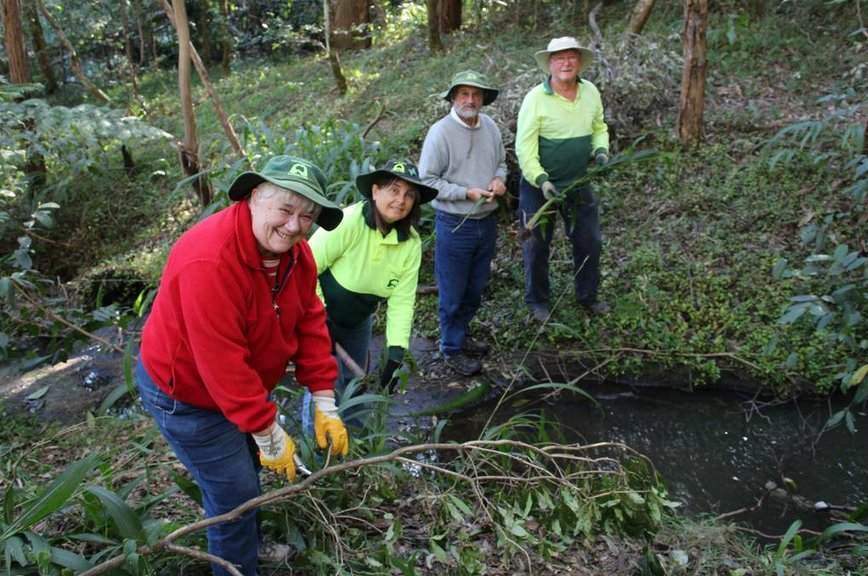 The group was established following an initial meeting for the Cleaner Waterways for Warners Bay Project on 20th December, 1999. John Hughson, the Lake Macquarie Landcare Co-ordinator at the time, spoke with interested community members about the benefits of setting up Warners Bay Landcare (WBLC) and possible grants that could be accessed.

Warners Bay Landcare’s first meeting was on 22nd February, 2000, and it was resolved to meet monthly to decide on projects and methods for conserving the natural areas of North and South Creeks within Warners Bay and Eleebana. The inclusion of Warners Creek catchment, which lies between North and South Creeks, was first suggested in December, 2002.

Kath Palmowski was elected chairperson of the group at its first meeting, and she remained in the position for one year, when Robert Loughran took over.

The organisational structure of WBLC includes members who attend the monthly meetings under the chairperson, and guardians for each Landcare site who are responsible for outlining the programme of work at their sites. The activities and associated resources proposed for all sites, are approved by the Lake Macquarie Landcare Coordinator according to the sites’ Agreed Action Plans.

Warners Bay Catchment The Warners Bay catchment has an area of 11.2 square kilometres and a variety of land uses. The built urban environment takes up 70% of the catchment, 3% is rural land with some equestrian properties, and 27% is forested land around the hillsides. Runoff from these areas flows into small ephemeral streams, then to the larger watercourses North Creek, South Creek and Warners Creek, and eventually into Lake Macquarie.

Landcare sites (past and current) within Warners Bay are

The vegetation communities vary on either bank at the North Creek Site: on the south bank, there is a linear remnant of LHCCREMS Map Unit 40 Swamp Oak-Rushland Forest with Casuarina glauca Swamp Oak and Phragmites australis Common Reed. Around the creek mouth on the north bank, there is a more complex linear remnant, resembling LHCCREMS Map Unit 38 Redgum Rough-barked Apple Forest with mature rainforest species, like Elaeocarpus obovatus Hard Quandong, and Glochidion ferdinandi Cheese Tree, amongst the Casuarina glauca Swamp Oak, Melaleuca styphelioides Prickly-leafed Paperbark, and Angophora floribunda Rough-barked Apple. A band of LHCCREMS Map Unit 47 Mangrove Estuarine Complex lines both banks of the creek in the tidal zone.

Bunya Park is a Lake Macquarie City Council park on the bank of South Creek, Warners Bay. It is part of a wildlife corridor and provides refuge for rainforest species found at nearby Green Point. The riparian zone consists of Casuarina glauca Swamp Oak Forest

Magenta Lilly Pilly Syzygium paniculatum a threatened species has been planted at with rainforest components, and is regularly maintained by Warners Bay

Projects and achievements Over the past 15 years Warners Bay Landcare has been involved with three government-funded projects, local (community) issues, education (schools and the public), annual national events, as well as monthly conservation activities within the three Warners Bay catchments.

At the end of 2000, a major grant was made to WBLC for riparian zone rehabilitation in the Warners Bay catchments, which consisted of $227,000 from the Federal Natural Heritage Trust, $174,645 from Lake Macquarie City Council and $200,813 from the Office of the Lake Macquarie Catchment Co-ordinator, making a total of $602,958. This amount included $60,110 of in-kind volunteer contributions.

Project duration was from February, 2001, to March 2003, and Suzanne Pritchard was appointed Project Officer in April, 2001.

North and South Creek catchments were the focus of the programme, with 327 people actively involved in the planting of 51,000 trees within an area over 5 ha. A considerable amount of this work was done by the Green Corps, administered by Conservation Volunteers Australia. Educational materials were also produced, with 16,500 brochures and 15,350 newsletters distributed.

As part of the educational programme, Suzanne Pritchard organised a “Water Week Wonder Walk” (14th to 20th October, 2001), which consisted of guided and self-guided walks along North and South Creeks.

In 2004, the CMA provided a grant of $8690 for the purchase of plants and mulch for riparian zone rehabilitation within the North and South Creek catchments.

Caring for Our Country

In June, 2010, a grant of $18,182 from the Federal Government, under the Caring for Our Country program, was given for the rehabilitation of the downstream portion of Warners Creek and for educational purposes (community and schools).

National Tree Day began in 1996 and, with Schools’ Tree Day, is the country’s largest community planting and nature care event. Warners Bay Landcare had its first NTD in 2002 at two sites: the Jones site at South Creek and at New York Avenue. At the former site, 60 persons attended and 1400 trees were planted. Every year since then, except in 2010, when the group helped with NTD at Wangi Ridge, WBLC has participated and a total of 21,241 plants have been put in. The group has been well supported by the community, notably by staff and friends of BUPA at Cardiff.
The Green Team from the LRC prepares the site by mulching and drilling holes, and LMCC provides funds for purchasing the tube stock. In recent years, LRC staff has been on hand to support the volunteers and provide food and drink on the day.
North Creek, Warners Creek and South Creek riparian zones have all been venues for NTDs over the years.

On 11 occasions, WBLC has supervised annual Clean Up Day sites in Warners Bay and Eleebana. Many, but not all, have been on Landcare sites, and volunteers have often ranged far and wide to bring rubbish to a central point for collection.

Every year since 1993, National Water Week has raised awareness about water related issues in Australia. WBLC has been involved with St Mary’s School and the public, hosting educational activities in Warners Bay. In 2005 there was continuous rain for several days, so three Landcare members entertained Class 6 children in the school hall by building an indoor catchment!

Lakelands, Warners Bay, has been the venue for six educational fish awareness days for children. Organised by WBLC member
Graham Dunlop, with assistance from LMCC staff, a ‘carp cull’ has been held at the Lakelands ponds. Carp cause environmental damage to waterways, and controlling them by removal is one management option. Prizes of various kinds were given out in several categories, including largest and smallest carp and most carp caught. Council and fisher groups have also attended in an educational capacity.

Between 2000 and 2003, developers proposed to cover the channel of North Creek near Warners Bay High School, the so called Delforce site, to allow heavy vehicle access to a new commercial area. WBLC was concerned that the placing of the creek in what was effectively a concrete culvert would have a deleterious effect on the hydrology, flora and fauna of the creek.
Submissions to the Council and meetings with the developers eventually saw the creek’s channel being saved. However, the flood plain has now been built up with car parks, roads and shops.

Lake Macquarie City Council invited WBLC to submit a report and make submissions on the possible environmental effects of placing a community garden adjacent to Endangered Ecological Communities that Landcare looks after in Bunya Park, Eleebana.
As part of this exercise, WBLC was granted public access at Council meetings to state its point of view. After a lengthy process, a DA was granted for the garden to go ahead.

Conflict of interests in riparian zones

It is not unusual for bushland reserves in urban areas to come under pressure from neighbours and the providers of utilities.
Children need recreation areas, and sometimes damage is done to native vegetation and soils in the process. When BMX tracks
are built on Landcare sites, for example, volunteers can find it difficult to manage the situation. WBLC is no exception, and eventually sought assistance from LMCC to repair damage to the South Creek riparian zone.
In other instances, the provision of additional sewerage lines and overhead power cables can, necessarily, cause disturbance to
vegetation and soils. Landcare sites in Warners Bay have been affected, but repair work has been negotiated by officers of Lake
Macquarie Landcare.