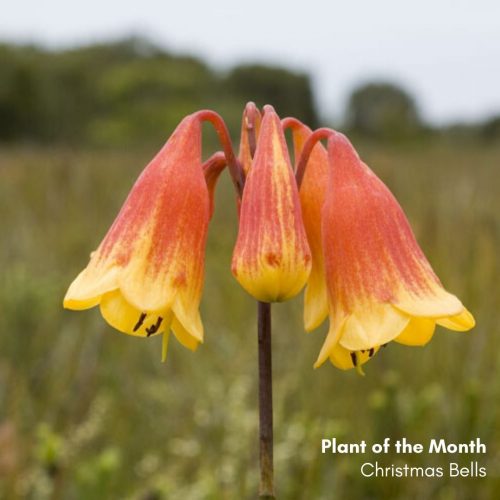 Continuing our Christmas theme is another plant associated with Australian Christmas. Christmas Bells (Blandfordia grandiflora) are reasonably common in coastal heathlands with most flowering around Christmas time up to about 4 years after fires or other clearing. There are three different species of Blandfordia in NSW with Blandfordia grandiflora occurring north of Sydney and inland as far as Glen Innes, easily identified when flowering with their pendulous, bell shaped red to yellow flowers.

The Blandfordia genus was named by English Botanist James Edward Smith after George Spencer- Churchill, 5th Duke of Marlborough, Marquis of Blandford a patron of horticulture, who, apart from running down the family fortune was the Great, Great Grandfather of Winston Churchill. The Blandfordia grandiflora was named by Scottish Botanist Robert Brown (hence the R.Br. author epithet), finding it near the Hunter River at Newcastle. Apart from taxonomy Brown made numerous contributions to the biological sciences with early descriptions of plant cell nucleus and cytoplasmic streaming as well as work on pollination and palynology (study of ancient pollen) as well as giving his name to “Brownian motion”, the random movement of small particles suspended in fluids .

When not in flower they look very much like any other grass like herb, the flowers can be mistaken for those of Mother of Millions but the plant itself is completely different. They can be grown by seed or division and can take up to three years to flower.